The post is said to have been uploaded on Oct 30 last year and contained an image accompanied by Azwanddin’s remarks.

When met outside the court, Ramkarpal who was representing Liew said that Azwanddin had apologised for the posts.

“The defendant (Azwanddin) has expressed his apology and has stated that the allegations made by him in the postings were without basis and untrue,” he said.

He added that among the terms was that Azwanddin had to publish his apology in six publications, including The Star Online, within 14 days.

“The defendant is also prohibited, via his own self, an agent, or his employees, from expressing, writing, or publishing speeches or words that are deemed defamatory as stated in the statement of claim dated Dec 27,2018,” he added.
Read more at https://www.thestar.com.my/news/nation/2019/08/28/039communist-uniform039-remarks-azwanddin-to-publicly-apologise-pay-rm40k-to-liew#e80IcmLQFL3Zk5Y2.99

In an Oct 20 Facebook posting, Azwanddin allegedly said the deputy defence minister was being insolent for donning a Communist uniform in the presence of the armed forces.

Lawyer Ramkarpal Singh, who is also the Bukit Gelugor MP, said Azwanddin had an article in the JMM website dated Nov 19 carried the headline <i>Defence Ministry under pressure and threat</i>.

The suit was filed on behalf of Liew by Messrs Karpal Singh & Co on Dec 27 in the Kuala Lumpur High Court and is fixed for case management on Jan 29.

In the said suit, Liew is claiming from Azwanddin, amongst others, general damages, exemplary damages in the amount of RM20 million and an injunction restraining Azwanddin from further publishing similar articles in the future.

This comes after the leader of the right-wing group calls Liew Chin Tong a threat. #azwanddinhamzah https://t.co/0cySt56Npg

Azwanddin had on Oct 30 accused Liew of wearing a communist uniform to show his “insolence” in front of Malay soldiers.

In an article published on Nov 19 on the JMM website, Azwanddin said Liew, who was appointed a senator, was a threat to the defence ministry.

Ramkarpal said the suit was filed at the Kuala Lumpur High Court on Dec 27, with case management fixed on Jan 29, 2019.

Liew is claiming damages totalling RM20 million and an injunction to stop Azwanddin from publishing similar articles in the future. 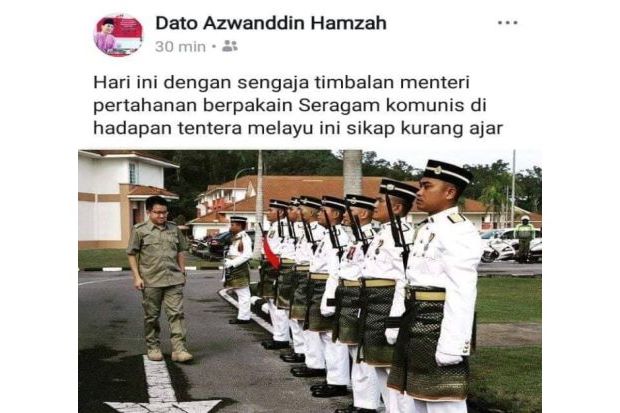 Azwanddin had, on Wednesday (Oct 31), posted a picture of Liew in what looked like some sort of uniform on his Facebook account, and called it a “communist uniform”.

He said it was “kurang ajar” (disrespectful).

He explained that the “uniform” was a bush jacket, and was provided by the Ministry of Defence for official military functions such as camp visits.

Liew pointed out that the khaki colour had nothing to do with communists, and reminded Azwanddin that former Prime Minister Datuk Seri Najib Tun Razak wore the same uniform during the 2017 National Day celebration.

“Military uniforms are exclusive and only applicable to authorised commissioners.

“The Defence Ministry’s office asks that JMM retract the absurd allegation that clearly shows a lack of intelligence and a prudent attitude in making statements,” Liew wrote.
Read more at https://www.thestar.com.my/news/nation/2018/10/31/chin-tong-says-jmms-communist-remark-lacks-intelligence/#d6dBJjhYwLMuTePI.99